You’ve heard of a family of carpenters or a family of soldiers – each generation continuing the legacy from before.     Jacob Perkins was an inventor but he also inspired his children.   They became inventors too!     But it all started in Newburyport in 1783.        Born July 9th, 1766, Jacob was going through the process of apprenticeship to become a silversmith.       Newburyport has had from the very beginning, a central role in this craft.       But his master, Elias Davis had just died and left his entire business to Jacob who was at the exciting age of 17.     Bursting with creative genius, he wasted no time exploring possibilities.     Much like Thomas Edison a century later, he delved into a wide range of industries.

In December, 1794, Perkins invented for the very first time a machine to cut and head nails in one operation, but the plant he opened to exploit it was ruined by an extended lawsuit over the invention.    After being vindicated after 7 years, The nail machine was finally erected at Newburyport his native town and afterwards at Amesbury right on the banks of the river Merrimack.

Jacob first and foremost success was derived by an investigation of methods to prevent counterfeiting.     In the early days of the United States, there was no single currency – banks and even states would create their own coinage and their own dollars.     With the looming threat of financial instability on a national level from fake currency, a real need arose.     In his day, copper dies were used but they constantly wore out and had to be expensively re-engraved.     His inventive genius was to use two methods by which counterfeiters would be hard pressed to duplicate.      Everyone knew at that time that steel could be softened and then hardened  – his move was to apply it to soft dies, engraving detail into them and then hardening them to permanently set them.

The second invention was to create separate engravings as much as 64 of them and then create an elaborate motif by re-arranging them and then locking them into place as a single design.    This allowed speedy customizing of each run and allowed a minting company to do multiple customers and to create products inexpensively.

By borrowing money from his brother Abraham (by giving him the mortgage to his home), Jacob established the mint in a building behind 16 Fruit Street in 1808.       News of his invention spread like wildfire.   In 1809, the Commonwealth of Massachusetts passed a Special Act forcing all paper money in the state to be printed by Jacob Perkins’ stereotype steel plates. This was an effort both to prevent counterfeiting as well as to promote more uniformity in the design of bank bills.

The engraving plant was in full operation under the careful supervision of his brother while Jacob turned his attention to other inventive interests.    They also produced penny coins and stamps.

For the next 23 years, it was here on Fruit Street where Maine & Massachusetts’ currency was engraved and most of it was printed. (Maine was part of Massachusetts at that time.)

Unfortunately, his minting process caused his designs to have a very homely look to them and they were not well loved in the marketplace.

In spite of this deficiency, Jacob was aggressive in his promotion of his minting process.

During this time, Newburyport, suffered the Great Fire of 1811.    Its devastation had a deep impact on him and he sought a more effective means to fight fires.    In 1813, he invented the Triangular Valve Pump which among other things doubled the amount of water that could be pumped and also could be constructed completely of wood.     Not only did his design lead him later to develop fire fighting equipment but he applied it to ship’s bilges for his hometown.      Even more than for fighting fires, his design spread rapidly to the entire country’s wooden sailing ships and was even outfitted on the U.S.S. Independence in 1814.

Ever a restless creative mind, Jacob designed a warm air central heating system erected in a Massachusetts Medical College in Boston in 1815. The 2 storey building was warmed by a single stove located in the cellar. The warm air stove was surrounded by a brickwork chamber, from which large diameter pipes were fed into each room through which the warmed air was supplied.      This of course was years ahead of its time.

It was the two main inventions of fire-fighting equipment and minting that led Mr. Perkins to end up in Philadelphia.

Philadephia was where the nation’s first mint was located.     It was also the home of Benjamin Franklin who created the first fire department for the City of Philadelphia.   In the fire-fighting industry, this was ground zero.       Sure enough, while he worked to convince the Department of Treasury to adopt his minting process, he entered into partnership with Thomas P. Jones in August 1817 as Patent Fire Engine and Hose Pump Manufacturers.   He advertised it as “an improved fire engine; a smaller village engine and a domestic engine for watering gardens and cleaning windows”. One innovation was a supply pump that could be placed in the basement of the building in which the fire was being fought, to collect and re-use some of the water already dowsed onto the fire.

Jacob appointed his son-in-law, Joshua Bacon in 1819 to manage the business and the firm became Perkins & Bacon. Jacob claimed to have “disposed of more than two hundred engines within two years”.

Frustrated by the refusal of the Federal government to accept his mint process, he moved to London in1819 in the hopes of convincing the Bank of England to adopt his process.      He explained the system to the directors of the Bank of England but could never get the authorities of the Bank to adopt it while the patent was still in force. The private banks however sustained him and he was able with the help of capitalists who purchased an interest in the invention, to create a factory for the making and printing of bank-notes; after 1840 it was also authorized to print Britain’s first-penny postage stamps.

His son back in America, sold the fire engine company to Samuel Merrick in 1821 and soon joined his father in England.    In fact, most of his expanded family moved to join him.

When he was in Philadelphia he met and became friendly with Oliver Evans who was experimenting with the use of steam at high pressure.   Some of Mr. Evans ideas caused Jacob to conceive a refrigerating machine. One of his patents was described as Improvement in the Apparatus and Means for Producing Ice, and in Cooling Fluids. The machine involved was constructed by John Hague in London and used ethyl ether, to produce a small quantity of ice. It was notable for the use of a weighted expansion valve.  Humorously, the huge device in Emit Brown’s Barn highlighted in Back to the Future III is a Jacob Perkins refrigeration machine. 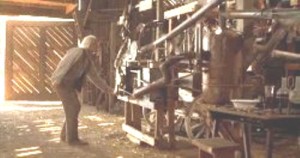 Although this was not developed to commercial success, it has been described as the precursor of all modern refrigeration compressors.

The Royal Society of Arts did recognize Perkins’ work in his improved method of fastening the seams of leather hose by copper rivets and for his design for a new swivel coupling that would not obstruct the flow of water.

In around 1819, Jacob Perkins began to become interested in the compressibility of water.  His experiments were presented to the American Philosophical Society in 1819, as a result of which Jacob was elected a member of the Society. Some of these experiments were carried out during his voyage from America to Liverpool on board the ‘Telegraph’.

Jacob Perkins actually pre-empted Faraday’s discovery in 1823 by one year that gases could be liquefied but because he was not recognized as a ‘scientist’ and was not a member of the Royal Society of Sciences at the time, his achievement was ignored.

On Tuesday, 6th December 1825 Jacob Perkins demonstrated his Steam Gun to the Duke of Wellington at a wharf beside the Regent’s Canal Basin. The Duke congratulated the inventor whilst the Duke of Sussex, who accompanied Wellington, went off crying “Damn’d wonderful – damn’d wonderful“. Word of the new weapon flashed around Europe but then the members of the establishment at Whitehall made their presence felt. They argued that – it would take too long to get up steam in a sudden attack; the Perkins gun was not easily portable and the generator and other parts would soon fail under the tremendous steam pressure.

Jacob responded with – “One pound of coals burned for raising steam will throw as many balls as four pounds of gunpowder. I will make a steam-cannon big enough to fire a one-ton ball from Dover to Calais“. However the “Nothing can beat gunpowder” argument carried the day and the British government turned down the invention. Jacob, however, continued to make improvements to his device.

In 1843 Jacob Perkins was involved in probably the first application of steam heating to railway carriages.

All in all, Jacob Perkins created over 21 inventions and patented the following:

Successive disappointments at length led him to retire in 1834 from active pursuits, and the last 15 years of his life were passed in retirement.      His greatest fault being that his inventive genius would not allow him to dwell long enough on any one industry to which he could directly profit.

The greatest legacy of all was the inspiration to his descendants who went on to achieve great careers as inventors.     Angier March Perkins had 14 patents and Loftus Perkins had 21 patents.

Mr. Jacob Perkins died in London at 84 years of age on 30th July 1849, and is buried in Kensal Green Cemetery London.

Newburyport should be very proud of our native son who went on to influence two great nations and impacted heavily on many industries during the heyday of the Industrial Revolution.

This entry was posted in History. Bookmark the permalink.