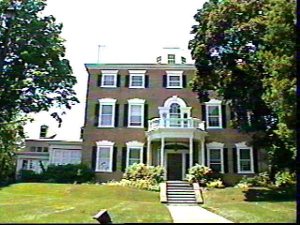 The imposing nature of this house screams history and grandness – yet the present Brigham Manor Nursing Home is but a shell of its former glory.   Its front had magnificent landscaping and an imposing fence facing the sidewalk and its back was a garden that literally stretched almost all the way to the Chestnut Hill Cemetery.

All these things are gone today and much of the garden is under blacktop in the back or grown over in forest.

Yet the history of this home is full of glory and romance and riches won and lost.

When the land was purchased by Abraham Wheelwright from John Greenleaf in 1806, there is no mention in the historical survey of the adventures that Mr. Wheelwright had already experienced.     The picture attached of him in his old age gives no hint that he was a Revolutionary War veteran of many famous battles and was a fanatical privateer.

I say “fanatical” because he would have a successful run for a while, then get captured, then escape and instead of being thankful to God for surviving the experience, he would join another privateer ship and go through the whole experience again and again.       In amongst his adventures, he had the presence of mind to make some good connections in the Caribbean which brought him great wealth later.     Before the War had begun, he had already been sailing on the Brig Dolphin which ran from the Caribbean to Canada.     As soon as the fighting broke out, he enlisted with Captain Enoch Putnam under the command of Colonel Israel Hutchinson of Danvers.     He experienced the Battle of Boston and saw the British abandon the city and fought in the battles around New York City and was active in major conflcts such as the Battle of Princeton while under the command of Colonel Henry Knox and under George Washington.     Later, when his commission was up, he joined the sloop, Isaac Elwell, and then joined other privateers until finally he was captured and brought to Ireland.       He escaped and snuck onto ships bound for the Caribbean.     Finally, he ended up in St. Eustatius which had declared its independence from England and after 11 months finally made it back to Newburyport.      Then, only after a few weeks of rest, joined the Uriah which had a very successful run until they were captured and he was taken to Antiqua.     He escaped again and came home via another privateer ship, the Ruby.      Even though he married Rebecca, daughter of Joseph Knight of Newbury at this time of his life, he jumped on board another privateer ship which after some success, was captured and he ended up in Bermuda.   He escaped again and finally found himself back in Newburyport.

Having enough adventures for a lifetime, he partnered with his brother, Ebenezer and they formed a busy merchant line of ships with the West Indies.     This turned out to be very profitable and he was able to buy some property on Spring Street and then later, the property on High Street all the way back to Brown Street.

His days in Newburyport were largely prosperous times owning part ownership with ships like the Pilgrim and the Brig Sally which were both built in 1804.     He served as a selectman in Newburyport in 1797 and in 1798 was one of the organizers of the First Social Library Society and promoted the establishment of the Newburyport Library.     He also joined other shipwrights into paying for, outfitting and sending off to the U.S. Navy, the ship, “Merrimack” as a gift.

The Merrimack ended up having an indirect role to play in the famous Merrimack and Monitor Battle of the Civil War.      The Newburyport-built U.S.S. Merrimack distinquished itself mightily in the quasi-war with France from 1794 to 1800.       The ship ended up capturing over a half-dozen French vessels and at one point drove off a superior force of French ships that had been blockading the port at Curacao.

In honor of the ship, the U.S. Navy built the steamer, U.S.S. Merrimack in 1855.      This ship found itself blockaded in Norfolk Virginia at the start of the Civil War.       Unable to sail to the open seas, the Navy burned the boat down to the water.     Later, the Confederates renamed her the Virginia and turned her into the first ironclad.         She had a brief successful run until she encountered the Monitor.    The resulting draw stymied her use and she was scuttled when union forces began to head south into Virginia.

As for Abraham, regrettably the Great Fire of 1811 and the War of 1812 endangered his fortunes and he lost the home at 77 High in 1813 and moved back to Spring Street.    He sold it to Peter Le Breton.     Later it was  sold it to Captain John Wills who had been living at 9 Fruit Street that was still owned by Abraham Wheelwright.       He and his twelve children moved “To the Ridge” in 1851.

The Captain had made his fortune with runs to the West Indies also and settled down as a successful merchant.    He was elected president of the American Seaman’s Friend Society and was a director of the Merchant’s Insurance Company and the Merchant’s National Bank.    These two institutions had been incorporated in 1831 and prospered greatly under Captain Wills hand.

It is the twelve children that I allude to concerning romance.    The eldest, Martha, ended up becoming the titular head of the children.    When the sons of Captain Wills went off to seek fortunes, it turned out they prospered greatly in the land of India.       When these sons wanted their brides to join them, Martha would ferry them over on the high seas to Calcutta where they would stay with a Mrs. Willis who kept a boarding house and had a kind eye to anyone coming from Newburyport.        Martha continued to do this until she in turn was engaged to a sea captain.

She was sitting in the summer house at the end of the magnificent Wheelwright gardens when she was startled by seeing her lover standing in the entrance.      She soon realized it was only an apparition and heard shortly thereafter that on that very day that she saw him in the garden he had died at sea.

She was so devastated by her experience that she pined away and died shortly thereafter.

Captain Wills’ wife survived him for many years and lived in the house until the 1870’s when it was sold to the Honorable Albert C. Titcomb.   Mr. Titcomb had made his fortune in the jewelry business in California and had moved back to Newburyport.     In 1887, he became chosen by the city council to become Mayor after the prior mayor had passed away in office.      He did such a good job that he won re-election handily.     He is well-regarded in historical and Commonwealth records and of course Titcomb Street is named after him.

In anticipation of converting the home to a convalescent center, major renovations were made including an addition in the back in 1957.     Finally, the nursing home officially opened in 1958.

Considering the fascinating events that have transpired in this home, it is a wonder that the home is not “haunted” and the ghost of Martha still walks in its halls.     The walls in the original part of the home must echo with all the rich stories of its past.

PS. Many readers have requested interest in delving deeper into the history behind the House Stories.    In the future, a Bibliography will be included in the downloadable versions.

This entry was posted in Preservation History. Bookmark the permalink.